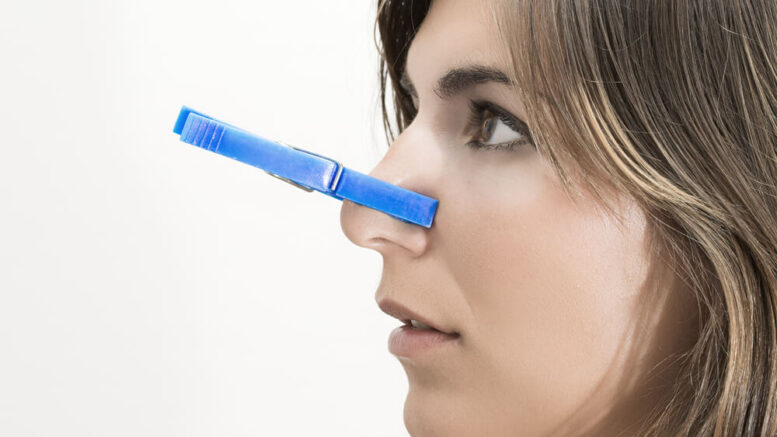 It was on March 17th, my son’s 10th birthday, that I first suspected that I had completely lost my sense of smell and most of my sense of taste. I could barely taste dinner that night which was crawfish with enough spices to bring back the dead. I realized that I did not smell it at all when it was cooking. When I sniffed the kids’ hands to see if they had washed enough, I smelled nothing and made them wash them again.

It wasn’t until the next morning, though, when I put on my perfume, stuck my nose right into my wrist, and smelled nothing that I realized what had happened. I could breathe perfectly fine through my nose air was coming in, but with out any smells. That was the part that was truly frightening: I had no explanation for why I couldn’t smell.

I reached out to my allergist because this had to be allergies, right? It’s the right season, the pollen counts have been high enough to be annoying, and I had some head congestion. She prescribed me some new nasal spray that I had used before and which made me almost gag in the past but now did. . . nothing. Then she prescribed me some predisone, and still, nothing.

You don’t realize how much you rely on your sense of smell until it’s gone. I wasn’t able to smell the mechanical burning smell when the dryer went haywire about a week later. I wasn’t able to sniff-check the kids’ hands to make sure they had used soap. I wasn’t able to smell dinner when I was cooking it (let alone taste much of it). I was particularly sad that I couldn’t smell the flowers. On the brighter side, I couldn’t smell farts, I was completely excused from conducting body odor checks on the 10 year old which meant my husband had that pleasure all to himself, and I could no longer smell the litter box.

I also didn’t know how long it was going to last. I reached out to random strangers on the internet who informed me that I could have a brain tumor, the beginning of Parkinson’s, or brain damage. And then, of course, I learned that ISOA – isolated sudden onset anosmia was a symptom of COVID-19. My first thought at this was, what the hell am I going to do with this information? I couldn’t get tested because I had no (recognized) symptoms and the tests were needed for people who were genuinely ill. I was already staying at home as my office had been closed since March 19th.

Could I have had COVID-19? Back at the very end of February and a little over a week after he had been to a conference in Austin, my husband came home on a Saturday morning complaining that he felt awful. When he got home, I took his temperature and sure enough he had 102.3. I sent him to the spare bedroom to get some sleep. When he got up, I sent him to Urgent Care to get tested for flu because he had the consistent symptoms. When he got back, the flu test was negative – they said it was too early for it to show – but gave him a prescription for Tamiflu. I quarantined him in our spare bedroom with its own bathroom, and sprayed Lysol pretty much everywhere.

He was fever free by that evening and has been ever since. He went back to work where two other people also had the same flu-like illness, one of whom developed pneumonia and one who tested positive for flu. Everyone was back at work within a week. During this period, I had a dry cough but no fever, no body aches, no chills. The kids were perfectly fine. Did he have COVID-19? Who the hell knows.

A week after my sense of smell disappeared, it was still gone. I had a terrible time finding information on when it might return or, if it was caused by COVID, whether it was a pre- or post-illness symptom. I played it safe and sent my husband to do the in-store shopping. I found a group on Facebook with other people who were experiencing ISOA. It was encouraging to know I wasn’t alone and that there were treatments (smell training is a thing). Yet no one was able to answer my ultimate question: when was I going to be able to smell again?

In the end, it took about two and a half weeks to begin to smell anything. I was able to get about 10 percent of a whiff from dinner and a snatch of a scent of my daughter’s shampoo. It’s now been almost a month and I would say my sense of smell is back to about 75 percent. I can smell the laundry again and Lysol and my perfume and face wash. I may conveniently lose it again, though, if my husband tells me it’s my turn to sniff the 10 year old.