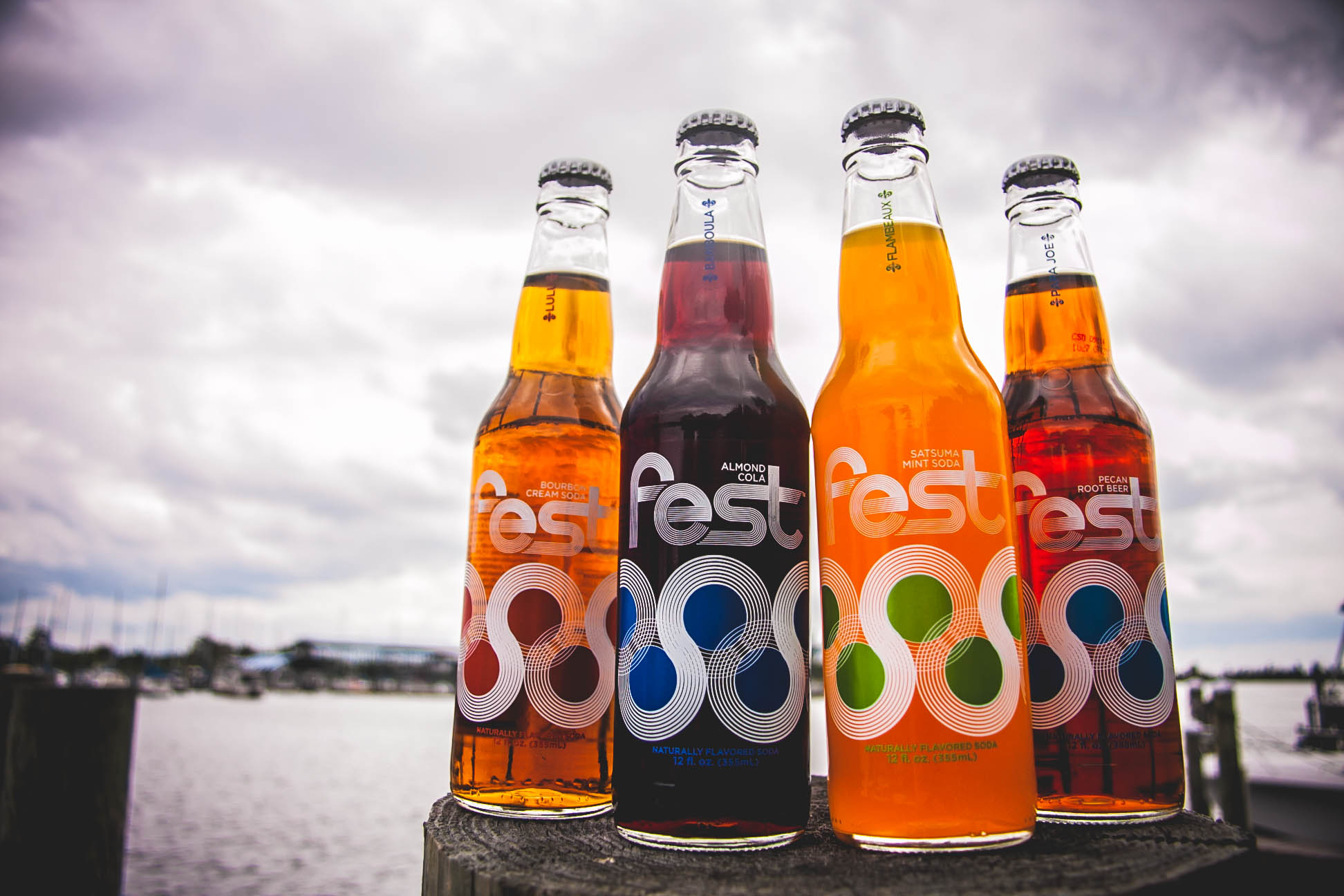 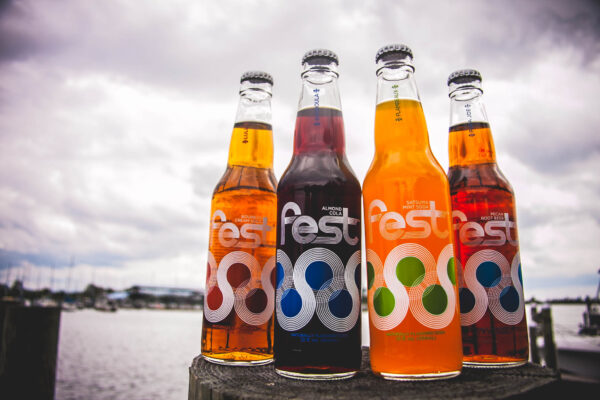 I don’t think that “going local” is just a trend. Part of what we’re seeing here is people once again beginning to appreciate what it means to be a community. It’s about keeping alive those industries that are run by people who live among us. It’s about familiarity, the comforts of home, and in New Orleans, it’s about the flavors that we share and love. If we’re talking about business though, going local means that we’re tired of big companies selling us things that don’t even have us in mind. We want to know that the food we eat, the spices we use, and our incredible drinks are grown, tailored and created specifically for the New Orleans community. It’s been done with cocktails and potato chips, hot sauce, beer and coffee, and now, the awesome people behind Fest Cola are taking the idea to soda.

Allison and I were lucky enough to be invited to the home of the Fest creators, and had a great chat about this tasty new local brand. We were surprised to find out before our interview that Fest Cola, despite having such a unique New Orleans vibe, actually originated right here in Madisonville, making this one a true Northshore original. So we took a short drive down Hwy 22 and sat with Roy and Ashley Nelson (true New Orleanians and hardcore Saints fans) to see just what was up with this incredible soda that we’re addicted to. As it turns out, Fest is a genuine labor of love from a real, down-to-earth family, and these guys live it every single day. From advertising to flavor testing to distribution, it all stems from a desire to give the New Orleans area something that they can call their own: in this case, a craft soda built from scratch. And we should be proud; Fest Cola is delicious. You can check their website for current locations, but we pick ours up at the Mandeville Rouses, and several times a week. It’s pretty incredible, the amount of flavor they’ve been able to pack into these sodas, and there’s a definite method to the madness. 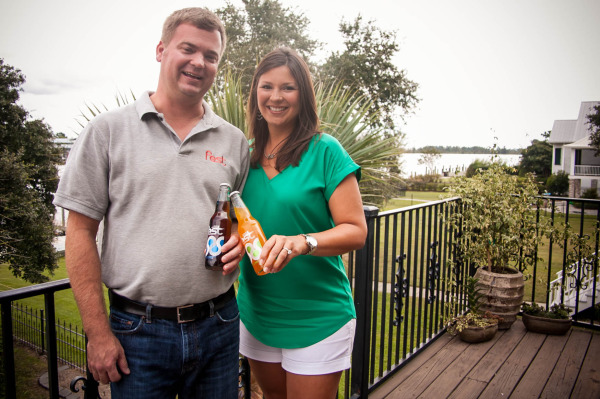 Apparently, as we’ve learned, there’s much more that goes into producing an excellent line-up of soda flavors than we believed. It starts with a general idea (in this case, flavors tailored for the New Orleans area). From that general idea, the creators of Fest narrowed the taste options down to some excellent classics: Pecan Rootbeer (makes such an awesome float), Bourbon Cream Soda (best cream soda I’ve ever had), Satsuma Mint Soda (cool citrus you must try to believe), and the all-versatile Almond Cola. This kind of line-up comes with endless taste-testing, and it’s definitely something that Roy has a knack for. His wife Ashley, on the other hand, knows the potential of these sodas as the basis for what we New Orleanians love: MIXED DRINKS. They encourage us all to use our imaginations when it comes to say, what kind of rum to mix in our Satsuma Mint, or what kind of whiskey would go best in an Almond Cola. Or perhaps what kind of frozen drinks we can make with a Bourbon Cream Soda. . . These are flavor logistics that should be taken seriously, and will be when Fest becomes the classic NOLA soda it is poised to be. After all, it was the flavors themselves that attracted us to exploring the Fest story and eventually led to this interview and article.

As a side note, each of these flavors has its own nickname printed on the bottle, and it’s definitely worth looking into the history of why they chose these special names, even if it’s just so you can impress your friends when they ask you why your drink is called a “Rum Flambeaux”. (“Jack and Fest”, anyone?)

So enough about getting drunk, and back to local business. We all know, or can at least assume, that starting a local business from scratch is hard work. Most of us don’t really know how much work it is, in fact, and probably because we’ve never been involved in that sort of thing. So let’s discuss: Fest Cola is the end product of a ton of research on the part of these owners. From coming up with the perfect name to reach the hearts of us New Orleans loyals, to taste-testing until perfection and coming up with the perfect design themes and advertising, the end result of stimulating all our taste buds is no easy task. In addition, Fest Cola is not marketed outside of south-eastern Louisiana just yet, and distribution is being handled manually by Roy himself out of the trusty Fest delivery truck (have you seen it around town yet?). Fest Cola is also sponsoring local runs and showing up at events. So obviously, he’s got his hands full trying to get this labor of love out to all the right people, so that it eventually becomes ultra-convenient for us to find a bottle. By all definitions of the word, he’s a true entrepreneur and I respect that whole-heartedly. We all should, because it’s people like Roy who have brought us some of our most cherished local classics. 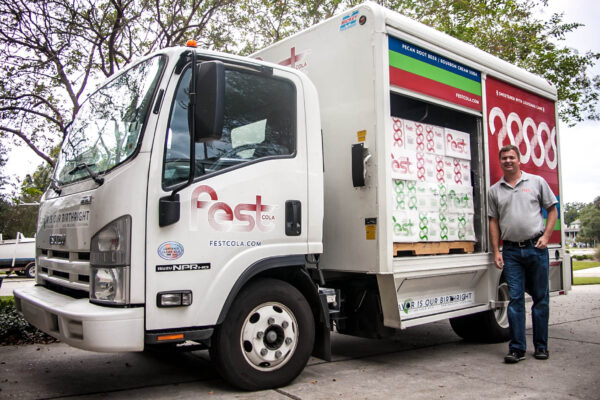 Fest is local, delicious, made with pure Lousiana cane sugar instead of some other weird sweeteners, and has huge potential to be the next New Orleans favorite. And I’m personally pulling for them after witnessing firsthand that they’re making all this happen with a family in full effect and a newborn on the way (congrats again!). I suggest that we as Northshore parents help make this happen for them. First by finding a bottle, and then (assuming you enjoy it) by passing on the word and even telling your local store what they’re missing out on. It isn’t often that we get the chance to be a part of turning a local item into a hit, and by all means Fest Cola is already a hit in my mind. It’s one of those things we’ll be able to tell our children that we watched grow from the very start.

Fest Cola can be found online at www.FestCola.com, and (hopefully) in a store near you. Probably safe to try a local Rouses first. Fest also has a Facebook page that’s worth following, and an email form on the website for getting in touch. Remember what small local business does for our community, and please always be thankful that we have brave souls willing to take these risks to bring us what we love.

Have you already tasted a Fest? What’s your favorite flavor? And if you haven’t had one yet, please do so and tell us about it! (And put some alcohol in there while you’re at it.)

And just a heads up on the future, we’ll soon be checking out Jubilee in Old Mandeville to see what this corner location is up to.

Til next time, Northshore Parents!

Jordan is a multimedia artist and father of a kooky 4-year-old girl named Fiona. He resides in Mandeville, and is a fan of BBQ and sushi, imported beer, retro-gaming, travel, and sci-fi.

Jordan is a multimedia artist and father of a kooky 4-year-old girl named Fiona. He resides in Mandeville, and is a fan of BBQ and sushi, imported beer, retro-gaming, travel, and sci-fi.

Be the first to comment on "Fest Cola {Small Business Spotlight}"