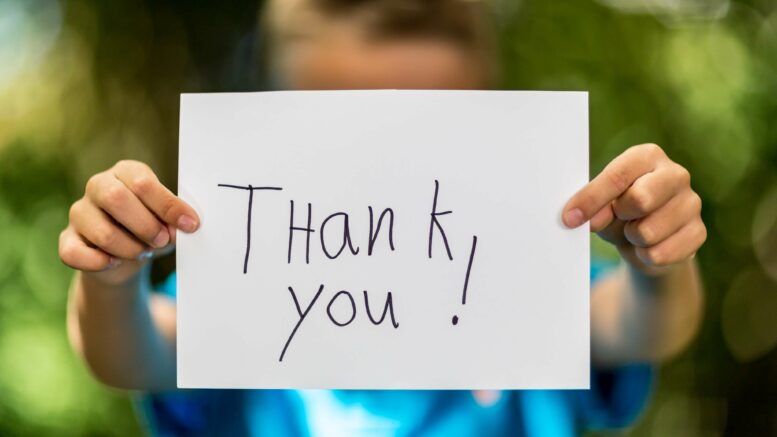 My parents recently took my 8-year old on a trip to Washington, D.C. and heroically marched him through as many museums and sites as they could cram in for three days.  Given that his energy level is in the stratosphere and his attention span is about a nanosecond, they had their hands full.  To be honest, they did more than I could have done and they are in their 70s.

To say that I was grateful is an understatement.  I made sure I let them know how thankful my husband and I were that they gave him this opportunity (and gave us a relatively peaceful home for five glorious days).  However, my child, the beneficiary of this amazing opportunity, did not seem very grateful and I knew that a grand gesture was going to be required.

I knew that he needed to write them a thank you note.

This went down as well as you can expect of a kid who positively bristles at writing, let alone on the weekend and that is not required by a teacher.  I knew that it was literally the least he could do.  I also knew that this logic was not going to work on him.  So, in the end, threats and a lot of prodding was required.

Because the thank you note is one of those traditions that I am trying to pass down to my children. My mother was a stickler for them when I was a kid (she still is).  I didn’t enjoy writing them when I was younger, probably because it was required, but as I got older, I really embraced the joy of crafting that truly great thank you note.

Then I had children.  Perversely, I chose being able to get out thank you notes for gifts as soon as possible after each was born as my way of advertising that I was totally rocking my new motherhood role instead of doing the practical and smart thing like showering or sleeping.

As the kids got older, and the presents were less momentous (you’re only born once, right?), I kind of slacked off in thank you notes. When my oldest started having birthday parties with other children, however, I was very eager to get the thank you notes out because once again that was my hill of motherhood to die on.  I soon learned that not many people send thank you notes anymore.

This caused me to rethink thank you notes all together.  Logistically, it was also getting harder and harder to get thank you cards to those who had attended parties.  I didn’t have addresses and I wasn’t going to ask their teachers to hand out thank you cards in class. Sure, I would still send them to family but everyone else was going to be out of luck.

In the end, though, I could not shake the guilt that as the gift receiver, I had to acknowledge the gift, somehow, someway.  And then, it hit me: social media.  My favorite and best way now to thank others for a gift? I take a picture of the giftee with the gift, either using it, or looking super happy at having received it, and text it or message it to the giver along with our thanks for the gift and for their presence at the party.  I love how easy it is but how it also personal.  I also love receiving these messages regarding gifts I give.  I love seeing that what I spent time choosing is bringing the intended joy to the recipient.

As for my son’s thank you note, he gave in to writing – by hand – the dreaded note and even agreed to draw a picture of something he liked on the trip.  There was some grumbling, but he either knew he was defeated or he knew that I found this to be really important and would not let it slide.  A few days after it was mailed, I got a call from my dad who declared the thank you note one of the best he had ever received and that it would be kept in the grandchild archives.  He also added that he could immediately tell that prodding was required.