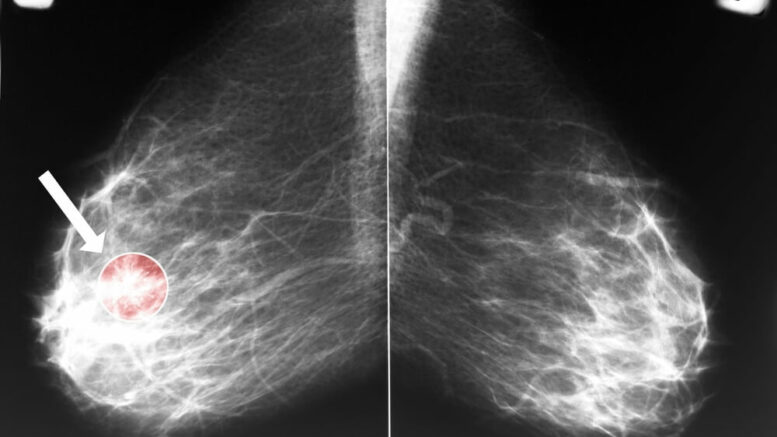 Throughout your teens and twenties, it’s pretty easy to live in a suspended reality – one where you never get old or need to spend much time thinking about 401Ks, mammograms, or renewing your license. You don’t need me to tell you: that ends.

I have breast cancer.

Sometimes it feels surreal to say that because three weeks ago I didn’t, or at least I was blissfully unaware of this disease growing inside me. Three weeks ago my aging and aching knees were my biggest health concern.

Three weeks ago, I had my very first mammogram. I turned 40 and my doctor sent a request for me to schedule it. I’ve always had a healthy fear of cancer so I didn’t waste much time and booked it on an available Saturday, but dreaded it. I’ve always heard how awful they were, hearing countless times that this contraption could not have been invented by a woman. But I was surprised by how painless it was. Uncomfortable? Sure. Unpleasant? Definitely. But not at all what I had imagined.

Truthfully, it’s one of the easier health screenings I’ve had and about 30 minutes later I was done and on my way to the grocery store. I have to say that even then, even though this was just a routine mammogram, my gut was telling me that it wasn’t over. Being a wife and mother with a full time job, I set those seemingly irrational feelings aside and continued on with my busy life. Still, I wasn’t surprised when, three days later, I was in the middle of complaining about my aches and pains when I got the call that some calcifications were found on my mammogram and a diagnostic mammogram was needed. The call came at a busy time so it was two days before I could work the follow up into my schedule. I didn’t have time to dwell on it much, but I spent a few minutes here and there researching it.

According to the American Cancer Society, it’s common to get a call back after a first mammogram because there’s no previous record to compare and it’s even more common for women who haven’t gone through menopause. I learned that there are a lot of things that providers look for on that first mammogram, many of which can trigger a follow up just as a precaution. So I knew the words and types of calcifications that I didn’t want to see on my test results, yet when the original mammogram results posted into my online health care system’s portal, there they were: fine pleomorphic and fine-linear branching calcifications in a segmented distribution. It was a common finding that was at a higher risk of being malignant.

The next afternoon I went in for my diagnostic mammogram. Like a regular mammogram, you can’t wear deodorant because it could be picked up on the images and man, I was sweating buckets.

They brought me to a little closet to change into a gown and wait my turn. It didn’t take long before they brought me for my imaging and I was surprised that it wasn’t anything more invasive than a regular mammogram; it just took deeper pictures. Then it was just a few short minutes later that they brought me back to my little closet to await my results. For diagnostic mammograms, the radiologist reads them immediately and decides what needs to happen next.

I heard the radiologist enter the room next to me, another woman awaiting her fate. I don’t know who she was or what her results were, but I can only imagine that it was good news because when the radiologist was free, a nurse came to my closet and asked me to go to a bigger room to talk about my results.

No one needs more space to give good news.

The radiologist came in and told me all of the things they look for in diagnostic mammograms that typically turn out benign. I knew what they were. I had researched them enough.

I fought tunnel vision to focus on his words. He described what he saw and said that it was as clear as the first mammogram. He was recommending no further testing that day, but to go straight to a core needle biopsy for an official diagnosis. We scheduled the next available appointment, which was four days later. I had four days to research every aspect of the radiologist’s report. For me, it helped me understand what was happening to me, it kept me calmer and made me stronger. I made sure to stick to reputable sites and armed myself with as much information as I could.

That night, I decided to tell my daughter that I needed additional testing. My plan was to tell her this but keep it light because I didn’t want her to worry. But when I did, I wasn’t prepared for her to look at me and ask the simple question, “Why?”

It was a very logical follow up question, but who knows what 17-year-olds will pay attention to? I thought she’d hear me, say okay and move on. I wasn’t prepared for anything further. “Why” was such a simple question, but I didn’t know how to answer it. I don’t lie to my daughter, but how much do I sugar coat it? Or do I just lay it all out for her?

I took a breath and started, “Well…” but then my voice cracked and we both immediately broke down in tears and my heart broke.

I hugged her and told her that even though 80 percent of all biopsies were benign, I couldn’t promise her that I wouldn’t have cancer. I could, however, 100 percent promise her that I was going to be okay. I knew in my heart that no matter the outcome of this, I would be around for her for a long time. It was just going to take a little effort. It was the first of many times that I’ve said this to someone, but it was also the one and only time I cried with someone throughout this entire ordeal.

Breast biopsies are interesting things. It was on the mammogram machine again because the images guide the needle, which you get up close and personal with, given the location. They try to make you as comfortable as possible but I still squeezed the heck out of my chair’s arms. The whole thing took about 45 minutes and it was mostly me trying to sit still with my cheek nearly touching the machine before I was bandaged up and told that I should get the results by phone in about three days.

Do you have any idea how long three days are? The wait was excruciating and was worse than actually knowing because I already knew the result in my gut– I just needed to hear it officially.

I decided that if I had cancer, I would get nachos. I hadn’t had nachos in years because they are so unhealthy, but I love nachos. So if I had cancer, my consolation prize would be nachos. Now many people told me I should have planned to get nachos either way, considering the extreme stress I was under, but really, not having cancer would have been good enough.

So when my stress got to be too much during the wait, I would consider nachos and figure out what kind I wanted and where I wanted to get them from because let me tell you, if I ended up with cancer AND crappy nachos, I was going to be pissed.

Talking about nachos all of the time made the people around me both laugh and groan because if I was expecting to get nachos, then I was expecting bad news. I was listening to my gut.

Still, I was a nervous wreck when the day finally came that I was to get the results. When I got the call, I was home alone, frantically cleaning my closet, trying to stay busy.

“I’m sorry to say, the test was positive for ductal carcinoma in-situ,” the nurse said and she was scheduling an appointment with a breast specialist.

I took a moment to panic and pace my house probably 10 times before stepping up to do the things I needed to do. I called my family and booked an appointment with MD Anderson for another review of whatever treatment plan we come up with. And, I got my nachos. I ate nachos until I couldn’t move.

I’m lucky though. That’s what people tell me and I know it to be true on my good days. The cancer that I have can be treated with Zyprexa surgery and I won’t need chemo. Still, it sometimes feels like I was handed a poop platter and told to be grateful that I got the good poop. But I know it could be worse.

It’s been a whirlwind of appointments and blood tests and I have a lot of decisions yet to be made. And a new “spot” was found that needs additional testing, so I’m not totally out of the chemo woods yet. (This time, I’m going for BBQ nachos as the consolation prize. )

No matter the outcome of this new round of testing, we caught it early. What I’m most thankful for is that first mammogram. It did its job and found it early and before it had a chance to spread.

So if you’ve been putting off scheduling that mammogram, don’t wait any longer. Yes,  we’re all busy and it’s inconvenient and unpleasant, but so is cancer. The earlier you find it, the better. That mammogram could save your life.

One thing I learned so far is that no one fights cancer alone. I even got a pass this Thanksgiving. I overcooked the pecan pie, I burnt the rolls and the turkey was dry. No one complained. They happily ate it and after dinner, they thanked me for cooking. So I guess there are some perks to having cancer that nobody mentions.

Outside of family, there’s an entire community of fighters and survivors all working together to support each other, so don’t fear the mammogram. Give it the opportunity to do its job.

For me, I know that there are more people than I can count rooting for the day when I can say this badass beat cancer! Until then, I’m ready for the fight, some days more so than others, but determined to win no matter what.

11 Comments on "{It Happened to Me} I Have Breast Cancer"