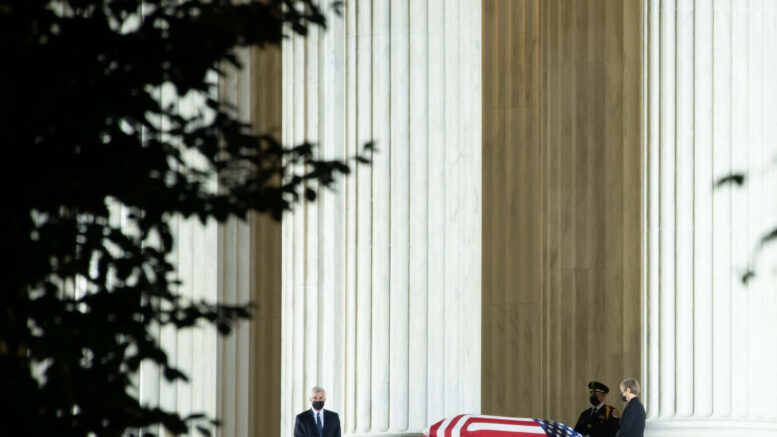 How Ginsberg got to her exalted position in life is fairly well known. She started at Harvard Law School in 1956 one of eight women in a class of 552 men and was asked at a dinner party by the dean of the school to justify taking a place that would have gone to a man. When she started at Harvard, she had a one-year old daughter at home. She finished at Columbia Law School, first in her class in 1959 and was not offered any positions by any of the white shoe law firms in New York. She eventually landed a clerkship with a federal judge after significant amount of persuasion by a professor at Columbia.

She became a law professor at Columbia Law and Rutgers and had a second child in 1965. She co-founded the Women’s Rights Project at the ALCU in 1972 which litigated more than 300 cases of sex discrimination–on behalf of women and men. In 1980, she was appointed to the D.C. Circuit Court of Appeals and then to the U.S. Supreme Court in 1993.

All through this, however, she was a mother and wife. In an interview with NPR’s Nina Totenberg at the Sundance Film Festival in 2018, she shared a story that epitomizes to me what a maverick she was for working mothers and fathers. When Ginsberg was working at the ALCU–writing briefs to the very Supreme Court she would one day sit on–she was receiving numerous calls from her son’s school about his behavior. Apparently, he was hyperactive (the teacher’s description) or lively (Ginsberg’s preferred adjective).

One fine day, however, after she had been up all night writing a brief, the school called again when she was in her office at Columbia. Her response to the school should be embroidered on a cross-stitch sampler of Parenting 101:

And she hung up the phone. The school called her husband, Marty Ginsberg and he headed down. Amazingly, once she put the onus on the school to call the kid’s father as well as her, the calls dried up to maybe once a semester. She said, “the reason was they had to think long and hard before asking a man to take time out of his work day to come to the school.”

Not only did she loop in her husband, the child’s father, in his school issues, Ginsberg reclaimed her time to pursue her work. She challenged the school to rethink its notions about who should be involved in discussions of the child and she trained them to think long and hard about whether the issue is really worth bothering either parent.

I will be the first to admit that I have never sent the school in my husband’s direction. My excuse, though, is that he works at a refinery and more often than not, he is somewhere in the bowels of the plant or in a random field and out of phone reach (lucky bastard). Still, the thought of it seems alien to me. How many of us moms are guilty of gatekeeping the school calls so they do not affect the father’s work day?

As a lawyer, I look to RBG for her amazing legal mind and intellect. As a mother, however, she is a far more important role model who teaches that a mother’s dreams and job and work are just as important and worth supporting as those of the husband.