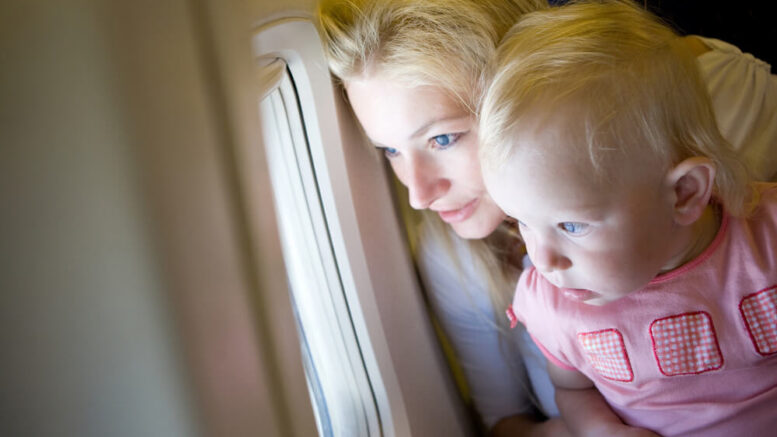 Settle in. Grab a drink. Maybe take a bathroom break if you’ve had a kid or two. Because you are about to experience a roller coaster of a tale that rivals anything an amusement park could ever dream up.

To set the scene, a close friend of mine is in a difficult spot, and I offered to take her two young boys for a couple weeks while some things get sorted. She is a nearly three hour flight away, but no big deal, I say, I’ll fly up and pick them up, then fly home with them. Note how casually I said this—like I was talking about popping across the street and not flying halfway across the country with two preschoolers. My first mistake.

The flight up is no problem. Lovely, in fact. I arrive and my friend I embrace, grab dinner, and chat the evening away. My flight home is scheduled to depart the next evening.

As I enter the airport for our flight home, my mood goes from mild concern (I’d never flown with children before) to full-blown anxiety. I wade through a sea of people to check in, pushing two full-sized car seats and a suitcase through the lines, while corralling a three and four year old. We finally get checked in and through security (after a considerable and stressful wait) and begin making our way to our gate. As we’re walking I realize we are at literally THE farthest gate from the entry point and are in danger of missing our flight. I tell the boys to “use fast feet” and we speed-walk/jog through the airport. It’s the most exercise I’ve gotten in months. Possibly ever.
Eventually, we make it to our gate. On time. Hallelujah. We even have a few minutes to spare, so I take the boys, who are both potty trained, to the restroom to try to potty before boarding. The little one says he does not have to potty and I believe him. My second mistake.

We get on our flight and the first half is great. Some minor corrections to the boys but hey, they’re little and they took direction reasonably well. Practically angel babies. Other passengers complement me on how well behaved they are and I start to feel a little cocky. My third mistake, and the beginning of the end.

Oh no. He’s scared of the toilet.If you’ve ever flown, you know these airplane bathrooms are not generously sized. And I, well…am. I physically cannot get in the bathroom with him AND sit him on the toilet AND close the door. It’s not possible. So I give up for the time being and send up a quick prayer that eventually he’ll have to go badly enough that the feeling will override the fear.We repeat this process three times. Each time I get progressively more desperate.Please buddy, if you go potty I’ll get you a jelly bean!Oh but you would be the coolest kid in class if you potty on an AIRPLANE!If you do not potty I’m going to have to call your mommy.If you do not potty I’m going to have to tell the captain.If you have an accident on the plane they won’t ever let you on an airplane again.

DESPERATE. But again, I cannot physically fit in the bathroom with him and make him sit on the toilet. Or so I thought.After the third unsuccessful potty trip, I resign myself to the idea that I’m likely going to have to deal with an accident at some point. I send up another silent prayer, this time pleading that it at least waits until the end of the flight. About 20 minutes later, the little one starts crying.“Miss ‘Livia, I had an accident…”

Definitely not my name, for the record, but the poor kid was distraught. So I say, “ok buddy, a pee-pee accident or a poo-poo accident?”“POO-POOOOOOOOO…”

Great. I take a deep breath, tell his brother to stay buckled, and whisk him to the bathroom. This time I force my *generous* self into the airplane bathroom against its will, lift him on top of the toilet to make room, and begin gingerly removing shoes and clothing.

I don’t even have time to hope it’s a couple little solid balls I can flush before I see, no. No. It’s not solid. Not even a little. There is diarrhea dripping down into his shoes.

At this point, dear reader, you may be thinking “oh no, you poor thing.” I want you to know, hold your pity. Because it gets worse.
So.
Much.
Worse.
But, you know, what can I do at this point except try to clean him up, right? I remove my face mask and stick it my back pocket for fear it will be contaminated and get to it. And I’m doing my best. Toilet paper, hand towels, soap. Anything I can use to clean him and his soiled clothes.
And then…it happens.
“MAMA (nope, not my name either) I GOTTA TI-TI”
I lift him off the toilet with superhuman speed, intending to open the toilet and direct him use it. But no. No. He immediately starts peeing all over me and the bathroom. I scream. I’m sure the whole airplane heard me. Heck, I’m sure the captain heard me.

And one would think, oh my, how awful. BUT WAIT, THERE’S SO MUCH MORE.

I refocus on doing my best to clean up. I do what I can, open the door, and with my back still to the rest of the plane, tell him (with substantial threat in my voice) to stand. right. there. I then clean the parts of the restroom I couldn’t reach while squished inside. I breathe a sigh of relief that it’s over, and turn around to the following scene:

A snail trail of diarrhea down the aisle from our seats to the restroom. The three year old, running through it. The four year old, climbing out of his seat, towards the mess.

At this point there was no judgment left for anyone to pass on me, so I didn’t even care. I scream/roar/bellow “BOYS. STOP.” And to their credit they both froze immediately. I instructed the four year old to return to his seat and the three year old to come to me. I again cleaned him up and looked at the flight attendant desperately. “Do you have anything I can use to clean that?”

Y’all, guess what he handed me. I’ll give you a hint. It wasn’t sanitizer spray. It wasn’t cat litter and a broom. Have you guessed yet? I’ll wait.
***
***
***
What did you guess? I bet it wasn’t hand wipes, like you get at a Hooters after you finish your wings. BUT THAT’S WHAT I GOT.
TO CLEAN DIARRHEA.
OFF THE AISLE OF AN AIRPLANE.
FOR A KID I DIDN’T EVEN BIRTH.

So here I am, on my hands and knees, crawling down the center aisle at 35,000 feet, cleaning diarrhea with 4”x4” hand wipes. Remember how I took off my mask earlier and stuck it in my back pocket? With everything happening, I never thought to put it back on. So I’m crawling and cleaning, crawling and cleaning, when one woman decides to turn her head, make a face, look down her (masked) nose and say in the most annoyed and disgusted voice possible, “Do you have a MASK?”

Y’all. I just thought my brain had already reached its breaking point. As it would turn out, that was a series of minor bursts, culminating in a total explosion when these were the first words anyone uttered to me throughout this entire experience. I lost it. What do you do when your brain is in fight or flight mode but there’s literally nowhere to flee?

Well, I’ll tell you what I did. I looked up at her without a word, then put my head down and silently sobbed the rest of the way down the aisle. Finally, everything and everyone is clean. I double back and wash my hands, replace my mask, and return to my seat. The older child had apparently decided he wants to sit next to me, but boy oh boy do I need a little space. So I gently ask him to go sit by his brother, to which he responds, “I don’t wanna.”

Lightning strikes. Thunder rolls. A thick white fog fills the cabin. Wind begins whipping my frazzled hair around as I get two inches from his face and whisper, through gritted teeth, “I. WASN’T. ASKING.”

Poor wee lamb. He looks up and nervously laughs, skittering across the aisle and back to his assigned seat. “I was just jokin Miss ‘Rissy!” Oh so NOW you know my name. I sit back in my seat and close my eyes, then remember I’m still responsible for two preschoolers for the remainder of the flight. I open them back up and take a deep breath, resigning myself to the idea that this nightmare wasn’t quite over yet.

The remainder of the flight was blessedly uneventful. As we shuffled through the airport to my waiting husband, I silently avoided eye contact with the rest of the population. When we finally made it to him, he took one look at me and wordlessly grabbed both boys by the hand.
As I told him what happened, I cried. When we got home, my sister-in-law was there, sitting with our girls. I told her the story too, and a bit of incredulous laughter was mixed in with the tears. By the time I told my friend the next morning, there was no crying, and thankfully, a good bit of laughter. So what did I learn from this harrowing experience?

Next time I fly, every wears a diaper. Everyone.