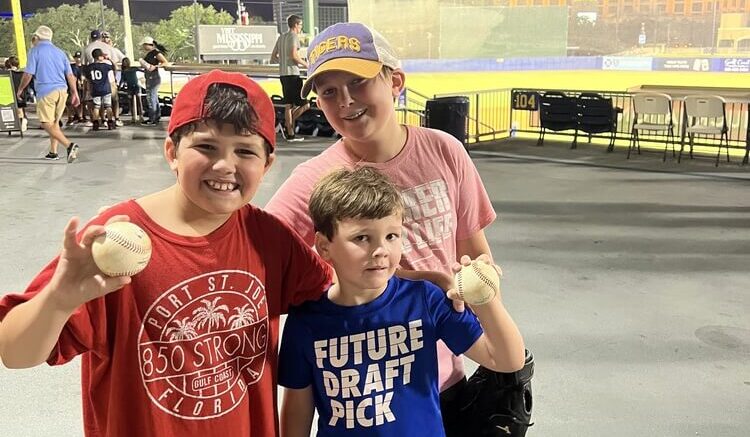 We are a baseball-loving family. I grew up playing softball, my husband baseball, and two of our three boys are totally obsessed with the sport. My 6-year-old is a Yankees fanatic who has crafted a 10-minute verbal dissertation in response to the question, “why do you like the Yankees?” (You’ve been fairly warned). My 9-year-old asks me to practice pitching and batting every day. and somehow memorizes the stats of at least 100 major league players. One of their greatest lamentations is that Louisiana isn’t home to any professional baseball teams. The closest teams to us are the Houston Astros and the Atlanta Braves, but those are definitely not day-trip distance.

When my mom suggested we try a Biloxi Shuckers game, I’ll admit I was underwhelmed by the idea. How much fun could we have at a minor league baseball game? Well, I’m happy to report I got past my skepticism, bought the tickets, and had an amazing night at the ballpark with the whole family.

I’m not sure what made the night so great, but I think it was a combination of things. For one, the tickets were affordable and plentiful so we were able to get great seats on the second row of the first base line. (Pro tip- I noticed “day of” tickets were cheaper than the day before the game). We were surrounded by a team of upbeat and enthusiastic little league players who I could tell were super excited to be there. The announcers kept the crowd entertained with professional yet amusing commentary. Most of all, the players seemed to be having such a great time! They took the game seriously, but also smiled the whole time and most were very interactive with the crowd. Between innings, players would throw the ball into the stands for a fan to take home as a souvenir. After the game, the players signed balls, gloves and even baseball cards, and all the kids in the crowd were invited to run the bases. The opposing team, the Montgomery Biscuits (yes, that’s really their name), even gave my boys baseballs! In all, it was a great, family-oriented atmosphere that I’d recommend to anyone wanting a trip to the ole ball game.

The Shuckers play their home games at MGM Park, located at 105 Caillavet Street in Biloxi, directly across from the Beau Rivage Hotel and Casino. We even watched a game from our room window when we stayed at The Beau! It’s about an hour and fifteen minute drive from Mandeville, so definitely more convenient than Houston or Atlanta. There’s ample free parking at the Beau Rivage and there’s a bridge to cross over to the stadium so that you don’t have to cross the highway, which is heavily trafficked.

The Shuckers might not be a major league team, but they are dedicated ballplayers who seem to love what they do. I’d definitely recommend a trip over to Biloxi one night to enjoy a game. You can find schedules and tickets at https://www.milb.com/biloxi. Have fun and, if you see us there, definitely do not ask my kid why he likes the Yankees if you want to have a chance to watch the game.