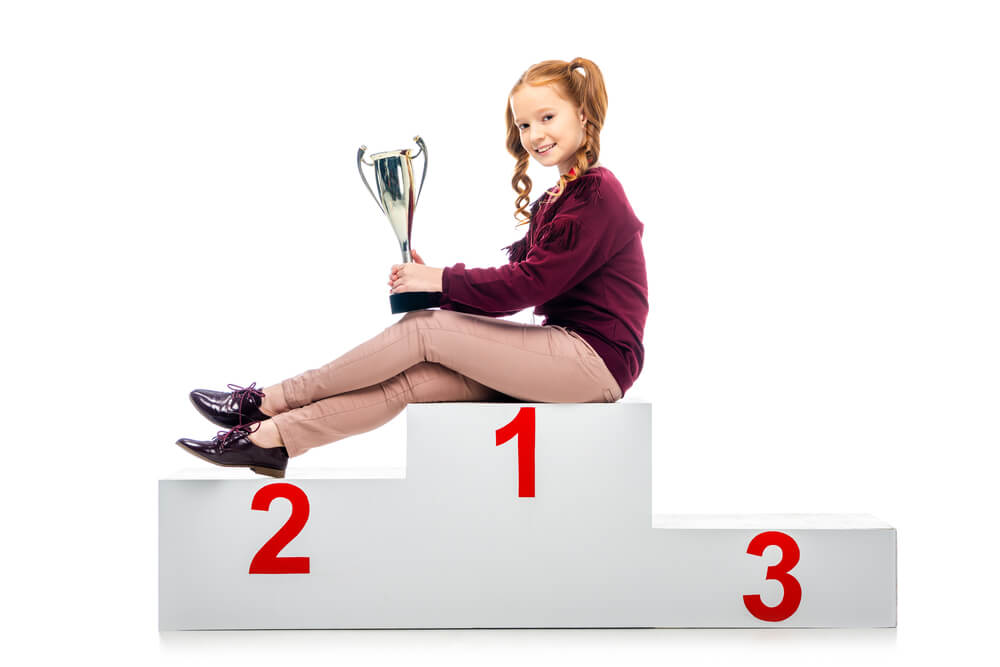 When I was a senior in high school, the student body voted me  “Most Musical (Girl)”. This wasn’t because I could play or even read music. It’s because I had a sad, obvious, and very unreciprocated crush on an actual musician (drummer- what a thirst trap) and I maturely expressed my feelings by lurking in the shadows of his shows and music classes while carrying an out of tune yet rarely-played guitar.

I can think of no less than 700 more fitting recognitions, such as:

Can you guess that I’m not a big fan of these awards?

Unless the award is Valedictorian or “Person with the Most Volunteer Hours Logged”, the calculation used to determine the winners of these awards is Popularity. And when a teacher decides without consultation of the student population, it’s Likability.

I pose a challenge to the Yearbook Committee Advisors, the Teachers, and the Parents who love these awards: Let’s find a different way to do these things.

Hear me out.  Since I know how much we hate to give out Awards for Everyone for no reason, I was thinking you’d all be behind me when I say, we could simply NOT give out Awards for No Reason to anyone. I know there are those out there for whom the annual awarding of the superlatives is a time-honored tradition and that you refuse to see that the decades-old “Most Likely to be a Model” award may be trash, but it’s my opinion that they do more harm than good.

Picture a PRE K Graduation (I know y’all love this topic too, let’s fight about it). There are 10s of cherubic, beautiful, little monsters sitting in tiny chairs in $40.00 paper caps and gowns awaiting the “awards” their teacher chose for them. Little KaTiffany gets “Most Supportive”, Madysen gets “Happiest Friend”, Avery P. gets “Prettiest Smile”, and Kahloey gets “Best Barefeet in the Kitchen”. Meanwhile, Rowdy gets “Future President”, Eli gets “Future Mathematician”, Jamal gets “Class Scientist”, and Jaden gets “Most Likely to Be Paid 1/3rd More in Salary than Women in the Same Job”.

I’m exaggerating for emphasis, but my implications are real. In a scientific survey of 10 of my random Facebook friends, I learned that many parents are dissatisfied with the gendering of these awards. At my son’s PRE K Graduation, I saw parents’ faces turn red when all the girls were awarded “soft skill” awards and the boys were poised to dominate the world.

Worse still, some parents I spoke with have seen their own or other people’s children be awarded mean or even cruel awards ranging from “Will Get Married the Most” to “The Passing Award” (passing is largely known as when a black or other person of color “passes” as white due to their skin color or mixed ethnic background). Sometimes these awards are so bad they make the news. Like “most likely to be a terrorist” or “most annoying” given a student with disabilities. This puts the teacher and student body in the role of anonymous mob bully to some unsuspecting student who is just trying to make it through each school day unscathed and certainly not called out for what they perceive as their weakness.

Now before you get your comment-fingers ready, please know that I realize that typically no harm is meant with these. A wise teacher-friend who proofread this essay noted that in the younger years, kindness and friendliness are exactly what teachers are charged with teaching our children and an award of that nature should make any student and their parent/guardian proud. From that perspective, I agree that it may be considered a great quality to be the Most Supportive person in your class or to be the happiest. Further, Teacher-friend stated (and I agree!) that seeing a fine quality or characteristic as a “soft skill” is an adult problem. It is, in fact, our emphasis on concrete skills and careers that makes what makes our children good people less important.

On the whole, superlative awards are better than an annual airing of grievances or being stoned in the quad by the baseball team so maybe there are some tweaks that can be made that don’t box up our babies young and old into gender roles? Or that don’t highlight the traits they’re most self-conscious about? They remember this stuff. We PUBLISH these things in yearbooks or on shabby certificates.

I can see why abolishing the awards altogether may be a bit hasty. My suggestion to keep the superlatives fun and within the spirit they’re meant, a couple things need to happen:

Below, I’ve listed a couple Tired vs Wired options for replacing the “old” superlatives, starting with my favorite option:

If you say you’re not behind a high-stakes, but low-rent talent show, then you’re a liar and I wish I never laid eyes on you.

What would you like to see in place of the sad Superlatives activity? What was the most ridiculous award ever awarded?

The author of this missive remains anonymous in order to protect her reputation as an absolute SHREDDER on the guitar and future inductee into various halls of fame. She hails from [redacted] and has [redacted] child(ren). She believes in being goofy when writing about goofy things and also that Black Lives Matter. She will not read the comments to this post or get in fights with strangers unless they try to cut to the head of the car line.

Kayaking on the Northshore

The Myrtles Plantation {An Honest Review}

Haunted Houses on the Northshore {and Beyond}