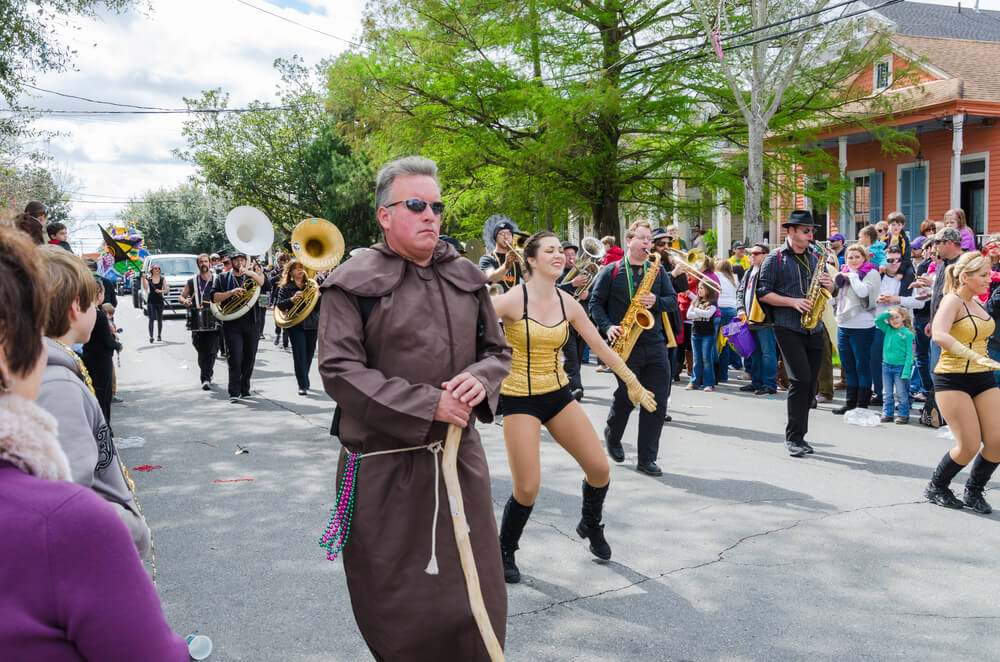 While there are always a variety of reasons, many people move to the Northshore for an improved quality of life. We have trees, a low crime rate, and excellent public schools that are open to all. There’s free music all throughout the spring and fall, delicious food, and the housing is less expensive than across the lake.

So now that we’ve covered all the great reasons to live here, let’s get straight to the point: we need to act a little better when it comes to Mardi Gras. We have a reputation, and frankly, it’s not a pretty one. Dance teams are touched and trash is thrown at them as they march. A large, popular male dance team marched a few years ago and many of their marchers said they would not return due to the derogatory slurs hurled at them and the proliferation of confederate flags along the route. This team could go anywhere, and they aren’t coming back to Mandeville for a reason. Teenagers congregate in huge groups and are known to attempt to grab throws off the floats. None of this is a good look. And rather than just complain about it on Facebook, I’m going to make a few suggestions for how we can improve the Mardi Gras experience for everyone.

Yes, it’s a party. Yes, kids play in the street. UNTIL THE PARADE ROLLS. Then you need to mind your people. Don’t get so drunk that you can’t manage it. If you plan to be drunk, don’t bring your kids or make sure their other parent is present and sober. Kids need to be kept away from floats to prevent injury. Kids should be kept away from railroad tracks. Mardi Gras is nobody’s god-given right and if your children are the kind that can’t be managed, don’t bring them. I personally have attended very few parades in last decade because I gave birth to a runner.

Hand in hand with this are teenagers. Require them to check in with you during the parade–maybe once an hour is a good rule. Letting your kids run free for hours because of our low crime rate is the opposite of a good idea. Maybe even encourage them to stand with you for the parade. No, it’s not cool, but it’s safer and results in a better experience for everyone.

We all know the expression: This is a marathon, not a sprint. Pace yourself and alternate alcohol and water. Float riders who are visibly ill or vomiting should be removed from floats–either by the police or by someone within the organization. Don’t give alcohol to teenagers. They are drama enough without additional substances.

Leave your divisive crap at home. Do not purchase divisive political crap from vendors along the route. I don’t know anyone who wants to see that stuff on Facebook much less in real life. Fly a flag on your house, write your congressman, put a bumper sticker on your car. Mardi Gras is about having fun with your neighbors of all colors and creeds. If that’s too radical and idea, STAY HOME. If someone starts calling a men’s dance team “Fa$$ots” tell them it isn’t cool. Peer pressure works. Ditto for anyone who whistles at little girls in dance or cheer uniforms or tries to touch them. Riders should not throw anything that is divisive in nature either. Again, make this fun for everyone–even people you don’t like. I swear even the bible says something about treating your neighbor well. This is not a new concept.

Our police can only do so much, and I think we need an assessment of whether we have enough officers for the parades and whether they are addressing the things the public most needs addressed. The same complaints shouldn’t happen year after year. There shouldn’t be a known spot where riders have their throws stolen off their float. There needs to be an open dialogue about the greatest areas of concern and how they can be managed. We might also need to abandon the “not my baby” mentality. If your baby is stealing throws or fighting in a fast food parking lot then they might need some interventions.

I grew up in Metairie and went to school in New Orleans. I’ve been to parades all over the New Orleans area. I’ve brought friends here from all over the country to enjoy Mardi Gras. I regularly host parties for parades. There is no reason an area like ours should have any of these issues. People moved here for a good quality of life–now they need to act like they know what that is. Don’t be rude and insulting, don’t touch the riders or the marchers. Don’t let your children become everyone else’s problem. If New Orleans can handle this, so can we. Let do better so we don’t have to read all the embarrassing posts the next day about how marching groups never want to come back here or someone got vomited on.