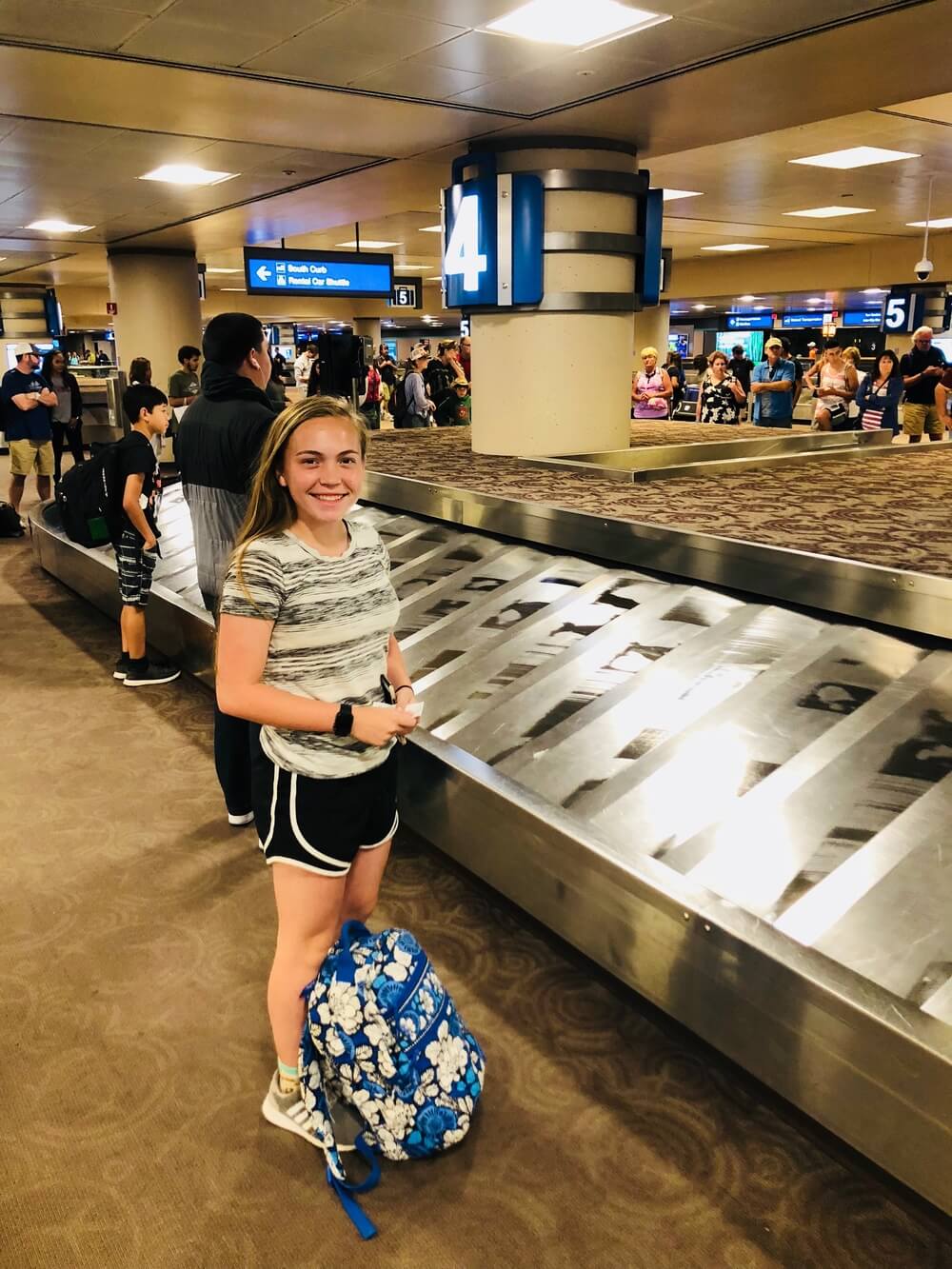 I knew the day would come when my kid would go off into the world on her own. It’s my job to prepare her for it. The problem is, there’s no one out there to prepare me for it. Given that she’s 15 years old, I thought I had a few more years before I needed to let go.

My daughter has had a pretty rough year, suffering multiple concussions from the sports she grew up playing. She’s had to find a new normal in life and has found her niche in photography. Her uncle, being the supportive person he is, asked if she could meet up with him for a few days while he was traveling. They would meet in Phoenix and travel to Utah, stopping at all of the national parks along the way with a goal of getting some of the most beautiful nature pictures that a young girl could dream up. What an amazing opportunity! Of course I would let her go.

But then it hit me. I have to let her travel on her own.

She’s no stranger to traveling. She’s been in airports around the world, but she’s never done it on her own. Was she worried? Not at all. I had faith in her, of course–it’s the world around her that worries me. So I did what I always do when faced with a new situation – I researched it. 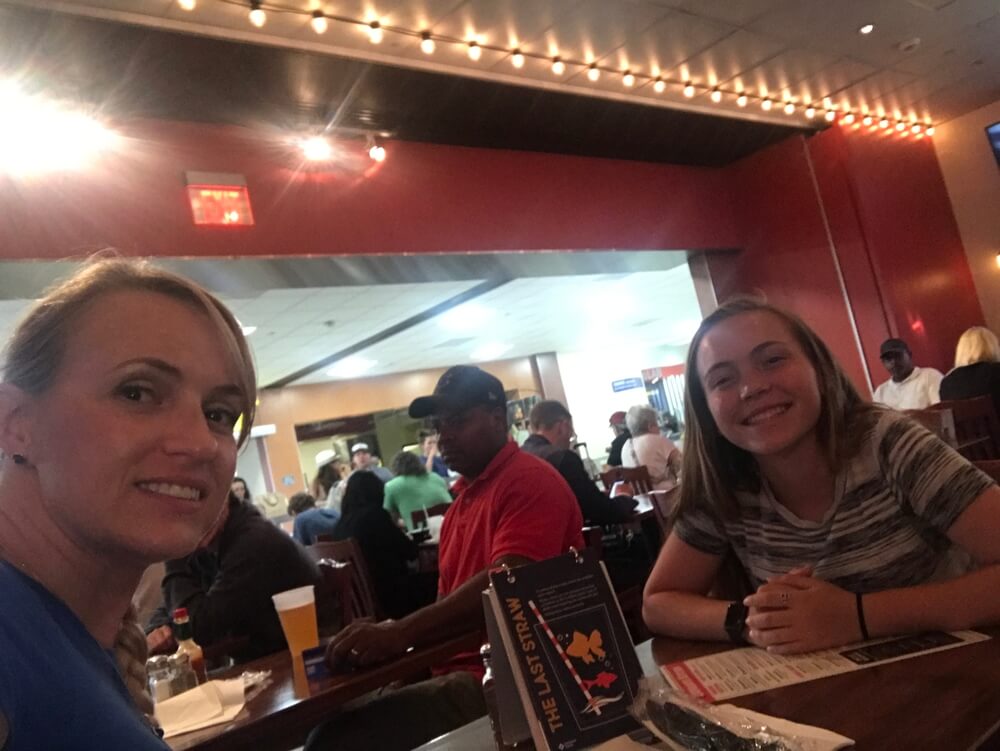 “Unaccompanied minor” is the search term you’re looking for, which I found after multiple searches of things like “adultless teenager.” I learned that the airports don’t make the rules, but the airlines themselves and every airline may have slightly different rules. Some let children as young as five fly alone–other require them to be older. Many are more relaxed once the child approaches their teen years, but anyone under 18 is considered an “unaccompanied minor.” This article from Airlines for America has links to the UM policies for every airline in the U.S.

She was flying out of MSY, who just recently announced that they have been experiencing parking problems and to park off property if possible. I was only going to be there a short time, so I decided to risk it. There was no short-term parking, so we parked in long-term and it took a good 20 minutes to find a spot. 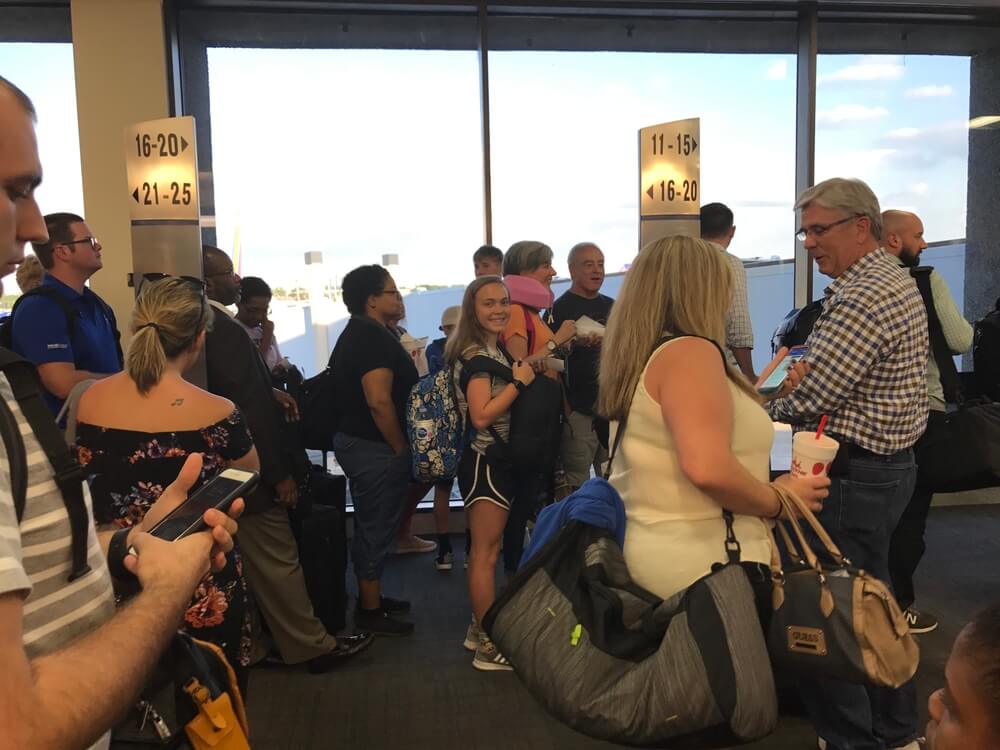 [Pro tip: If you are traveling from the northshore, check flights from the Gulfport airport. You might just find a cheaper flight and the travel time to the airport is about the same as getting to MSY.]

At Southwest, an adult bringing an unaccompanied minor to the airport can get a blank ticket to accompany your minor to their gate. When we arrived at the airport, we checked her in at the kiosk check in, but went to the desk where we checked her luggage and asked for an escort ticket. The woman asked for my daughter’s age, then gladly handed over my ticket after producing my driver’s license.

We got to security and I had a moment of panic realizing that I had my purse with me. When I travel, I never bring my every day purse – God knows what wonders a mother keeps in her purse. There’s no way that thing will make it through security! I was at the conveyor belt with all of the hurried travelers behind me and no time to start pulling my whole life out of this thing, so I dropped it in the basket along with my shoes and prayed for a miracle.

My prayers were answered and I somehow got through! On the other side, I felt relief. Truthfully, after getting through security, I knew my child would most likely be safe on her own, but she had an hour and a half wait to wonder the concourse and I was glad for the opportunity to wait with her. I read online that minors could get a special lanyard at the gate to identify them to the flight attendants so that they would check on them often. So we went to the gate desk and asked, but unfortunately, Southwest only does that for those 12 and under, much to my daughter’s delight. 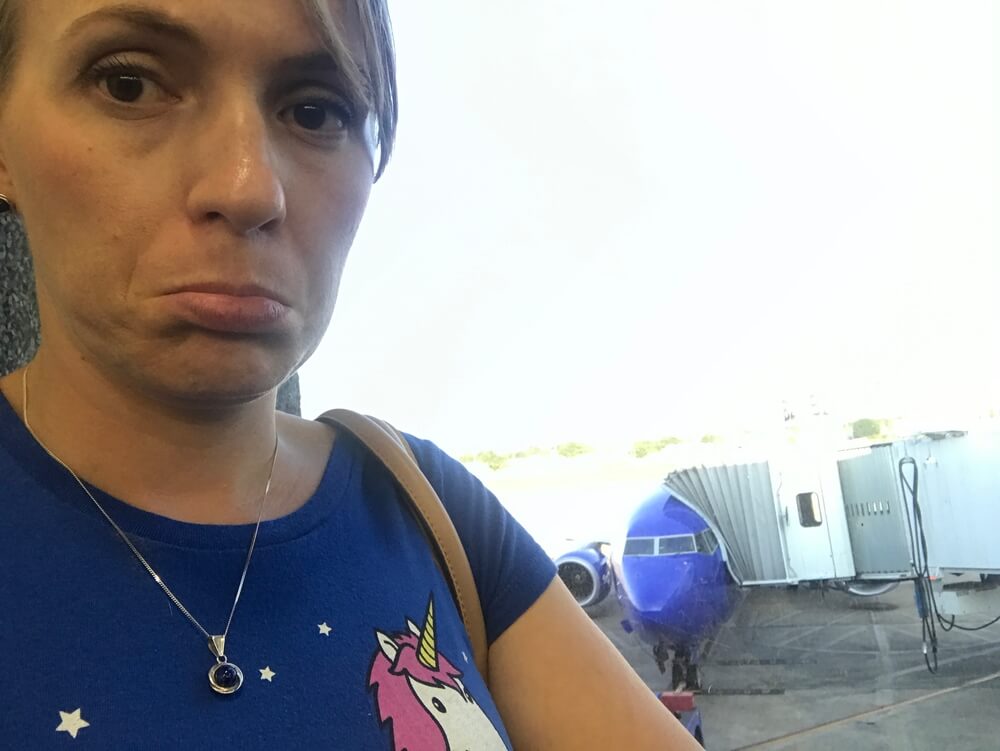 We killed time by having dinner and making a pit stop to load her bag with a few more snacks. Then we headed toward the gate, where she lined up like she knew what she was doing. I did the mom thing and starting snapping pictures of my big girl. She let me, knowing that she wasn’t going to get away without it happening anyway. 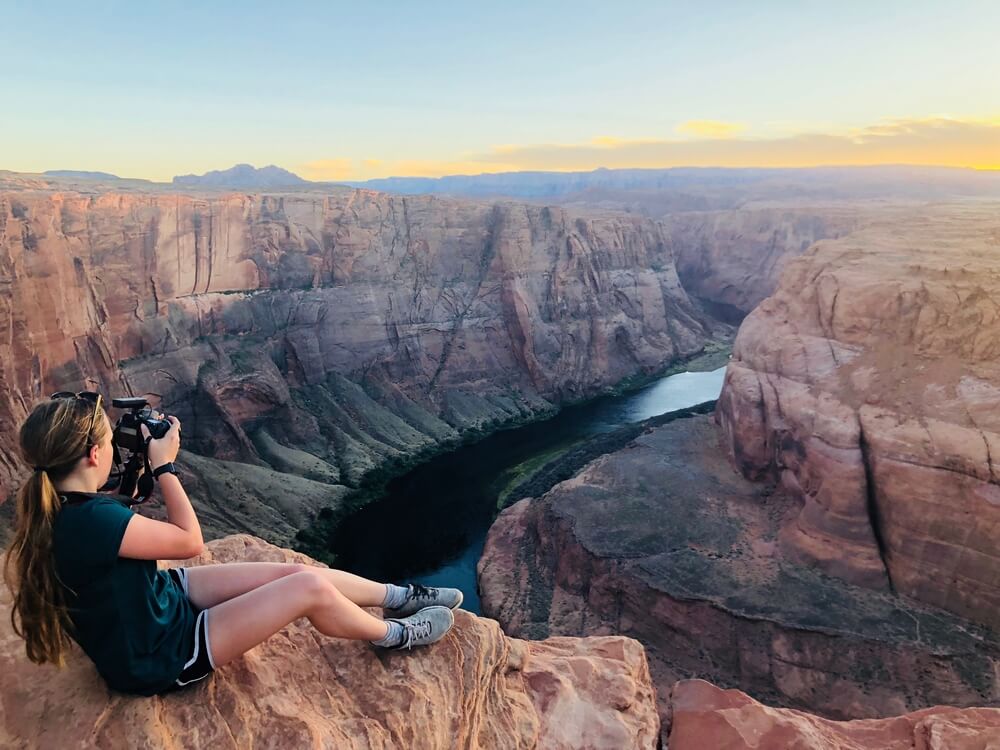 “Be safe. Make good choices and remember that I want photographic evidence of your arrival.” My parting words.

I left the airport after paying $8 for my parking time, which was about 2 hours. Then it wasn’t long before I got the arrival pics. My brother was able to get a ticket to meet her at gate in Phoenix as well and walk her to baggage claim. Then I received daily photographic evidence that she was still alive and well. Check out those smiles! 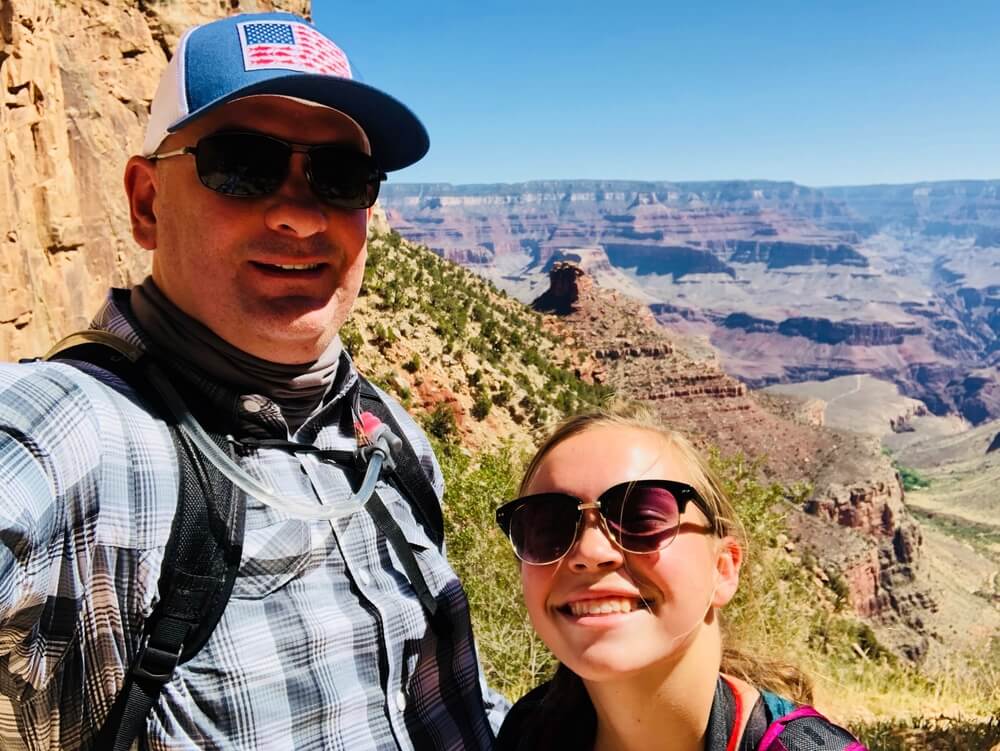 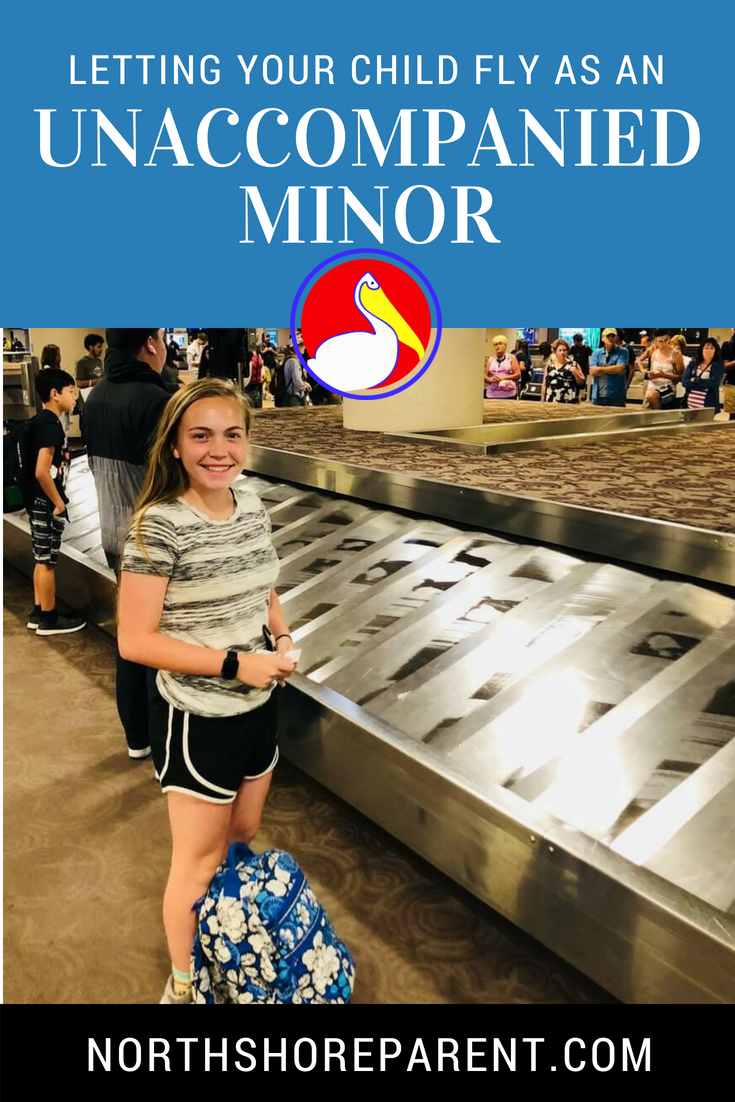 1 Comment on "Preparing Your Child to be an Unaccompanied Minor"